Although the journey only takes about 30 minutes by car, the train takes a scenic meander along the coast and into the countryside. It makes for an interesting and inexpensive day trip where you can explore other Alicante towns.For the best views, sit on the right side of the train if you are going from Benidorm towards Denia.
You will enjoy fantastic coastal views before the train makes its slow way through the mountains amid the rural countryside. You can make a game for the children to see how many sheep, goats and birds of prey they can spot. You will also see terraces of vines, olive groves and orange trees.There are also some fabulous bridges and viaducts which are worth looking out for,especially when you get close to Gata de Gorgos and Benissa.
The track is pretty high up along here with some sheer drops, which add to the overall excitement of this train trip.The best days to take the train to Denia are on Mondays and Fridays, which are market days. The Monday market sells everything from household goods and clothes to leather items. On Fridays, there are two markets – one selling fruit and veg, with the other selling second-hand goods.The 50-kilometre journey will take about 77 minutes and a return ticket is just€6.40 with a 50% discount for pensioners. It is advisable to take some water with you and maybe a snack. 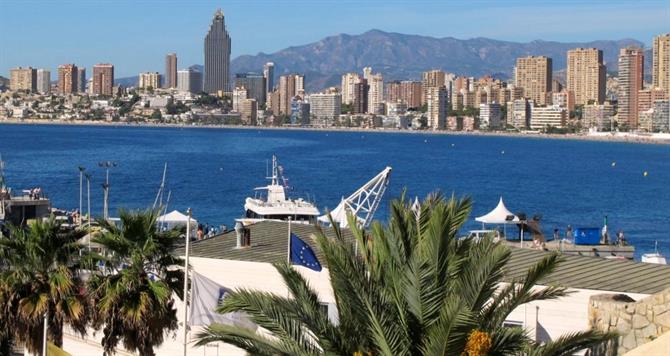 First stop- Benidorm
The journey begins at the bustling resort of Benidorm. The first train is at 6.26am so you could catch this after a very good night in the entertainment capital of the Costa Blanca! Benidorm’s skyscrapers remind many people of the great US city of New York. It’s fabulous skyline, great beaches, superb nightlife including the award-winning Benidorm Palace with its cabaret acts and music, and microclimate have kept Benidorm at the top of the tourism league for many years now. Benidorm also has some top theme parks such as Terra Mitica with its great rides, the Aqua Natura water park, Terra Natura wildlife park and Mundomar for marine life and exotic birds.
All aboard for Altea 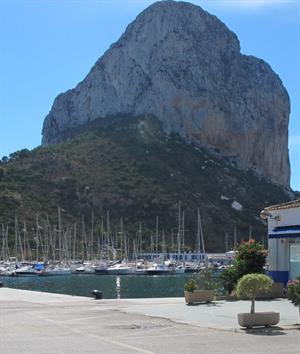 All along this part of the train ride, you will enjoy breathtaking coastal views of the magnificent yachts and harbours all the way to Altea. Cross the main N332 road and you’re on the beach within a couple of minutes. Altea is one of the prettiest towns in the Alicante region with two main areas to explore. First stop, the beautiful little beaches and coves which stretch for about eight kilometres. It’s a perfect place for snorkelling, sailing or surfing. The beachfront promenade has plenty of restaurants and bars with many shops along the busy N332 road. From here it is a steep climb up the narrow cobbled streets lined with whitewashed houses to the picture-postcard old town with its iconic blue-tiled church dome. If you like curries, the next stop of Olla de Altea has an Indian restaurant, Saffron, on the platform instead of a traditional station café.
Rocking our way to Calpe
The train continues its journey alongside the crystal-clear Mediterranean so you can enjoy far-reaching views as the train gets higher and higher above sea level.The impressive Ifach Rock, standing at 332-metres high, dominates the skyline as it juts out to sea at Calpe. The Ifach attracts serious climbers as well as walkers who can enjoy an easier route to the top where they can stumble across wild flora and fauna as well as being rewarded with fabulous views. Calpe is a vibrant coastal town with sandy beaches, a salt lake where many flamingoes have settled and a pretty little marina.
Onwards and upwards to Benissa
The train now starts to weave its way inland so you can enjoy great rural views. The countryside around here is very fertile with plenty of fruit orchards – especially oranges and lemons, vineyards and olive groves. The mountain views are spectacular with jagged grey cliffs and some hairy sheer drops! This is the best place to see animals such as goats,sheep, rabbits and birds of prey. The next stop of any note is Benissa, which is a pretty, historic town between the cliffs and the sea. It is a popular spot for snorkellers who enjoy the private, little coves and clear waters. Other visitors enjoy strolling through the old town centre which has some beautiful historic buildings such as the monastery, town hall and old council rooms, while the more adventurous can head for the Bernia, La Solana, Olta or Malla Verda mountains, either on foot or by bike.

Making tracks to Teulada
The train continues its journey through the green, fertile land to Teulada, a region which is well-known for its wines, particularly the sweet mistela wines. Teulada has a pretty, historic walled town centre with some impressive Gothic buildings.During a gentle stroll through the old streets, you will come across the parish church, several chapels and the courts of justice. In the 19th century, Teulada’s agricultural products were transported by sea from Moraira.Today Moraira is a popular coastal town with pretty beaches, particularly El Portet which is a rocky cove with sparking turquoise water. Moraira also has a pretty marina and old town with some fabulous seafood restaurants. 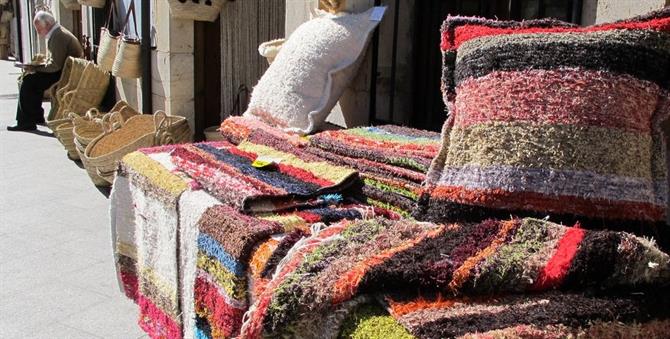 Weaving along to Gata
Fans of bridges and viaducts will enjoy this stretch of the journey the most. On the way to Gata there are some interesting stone viaducts and bridges taking the train on its final leg towards Denia. The town is full of character with traditional crafts dominating the shop window displays. The local grasses and reeds are dried to make cane furniture, baskets and hats. The displays spill out on to the pavement, giving Gata the name of the ‘bazaar of the Costa Blanca’. There are also two talented guitar makers in the town – Joan Cashmira and the Francisco Bros -and you can visit the workshops to see the musical instruments being crafted by hand. 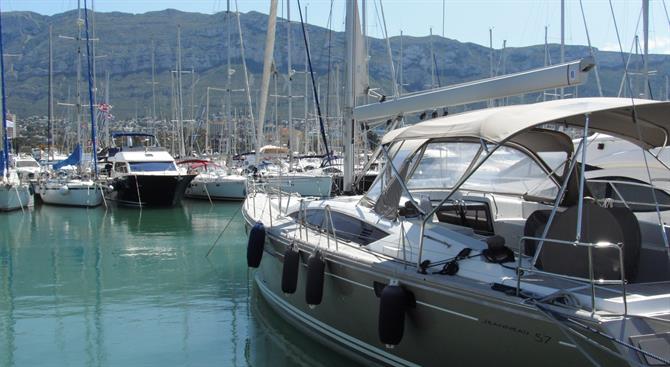 Dining out in Denia
Now the train makes its way around the Montgo mountain, which is a popular challenge for walkers and cyclists, to its final stop at Denia. Denia is the dining capital of the north Costa Blanca region with hundreds of restaurants including Quique Dacosta, which has three coveted Michelin stars. Denia is a delightful coastal town with an impressive castle where you can enjoy far-reaching sea views. The town has 15 kilometres of golden, sandy beaches, a large marina which is home to some expensive yachts, and a pretty old town. It puts on some magnificent fiestas throughout the year, especially fallas where large satirical statues are put up in the streets and burnt, and Moors and Christians, which involves running battles, gunpowder and fireworks.