It’s a magnificent, well-preserved castle on top of the Benacantil mountain and it dates back to the 9th century, although older artefacts from the Bronze and Roman eras have been found there. In the 9th century, the Moors ruled the peninsula so you may see some Arabic influences in the architecture and layout. The Santa Barbara castle is one of the best examples of medieval fortresses in Spain as well as being one of the largest. It’s a great place for letting your imagination run wild while you explore the dungeons, towers, palaces, cannons, churches and a moat.

View of Alicante marina from the castle

The climb to the very top is definitely worth it as here you will find the iconic tower which stars on many photos with its fantastic views down to the marina. The paths up to each level are steep so flat shoes or trainers are advisable. Luckily there are seats to stop for a rest as well as a restaurant and café.
Who was King of the Castle?

The castle has a rich, chequered history and has served many purposes. In 1248, it was captured by forces led by Alfonso XI of Castile, who renamed it Santa Barbara as it was conquered on her feast day, December 4. The Aragonese won control in 1296 during the reign of James II, who was also King of Valencia, and he ordered it to be rebuilt. More reconstruction was ordered during the next four centuries.

The castle fell into foreign hands in 1691 when it was bombarded by a French squadron. It was then held by the English during the War of Spanish Succession. The war, at the start of the 18th century, was fought between European countries in a bid to decide who should succeed Charles II as King of Spain. It lasted from 1701 until 1714 and was concluded with the Treaty of Utrecht which recognised the French candidate as Philip V of Spain. The war produced famous generals, most notably John Churchill, whose victories for the British at Blenheim and Ramilles saw him created the first Duke of Marlborough. Its military role to protect the city became less important and it was used as a prison in the 18th century.
Breathtaking beach views

The iconic castle was abandoned until 1963 when the city opened it up to the public. It is now a great place for a healthy walk, a meal in the restaurant or to simply enjoy the far-reaching views over Alicante marina, Postiguet beach, the city centre and the nearby mountains. 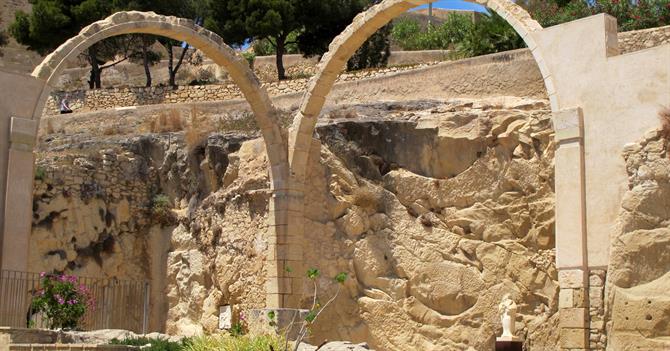 There are three main areas from different epochs. The top level, La Torreta, where you can enjoy fabulous views over Alicante bay, is where you will see the keep and where the oldest remaining parts of the fortress are found. Much of this dates from the 14th century. The governor’s house, impressive towers and old hospital are among the buildings to be explored up here.

On the next level down are some of the castle’s most important buildings. These date from the 16th century and include the Felipe II salon, ruins of the Santa Barbara church, guardhouse, barracks and parade ground. The lower level dates from the 18th century. You can park here and walk up to the top or take the lift. There are large cannons poking through the thick castle walls, the exhibition centre and the dungeon on this level. Also the Alicante museum MUSA can be found in the castle with information and artefacts about the city’s rich and interesting history and people.
Concerts by starlight

In the summer evenings, Alicante council organises special concerts on Fridays and Saturdays in the castle courtyard. They start at about 10pm so you can enjoy a star-lit, outdoor concert with the castle in all its majesty in the background. The castle also has an exhibition centre and this year you can see a fabulous Star Wars exhibition with a collection of hundreds of figures and memorabilia from these sci-fi films.

It is possible to walk up to the castle but this is a long, hard slog. You can drive up as there is parking on the first level but it may be difficult to find a space in the summer. Otherwise, take the lift from opposite the Postiguet beach, a suntrap for the citizens of Alicante and tourists alike. The elevator costs €2.50 but is free for young children and retired people.Walk through the tunnel carved out of the rock and you will find the lift. Don’t forget to buy your ticket in the machine just inside the tunnel.

It is free to walk around the castle but you may wish to take a guided tour, which is conducted in Spanish and English, for €3 or €1.50 for children, pensioners and people with disabilities. On Saturdays, there are dramatised guided tours so you can really immerse yourself into the spirit of medieval life. It is also possible to hire an audio guide so you can discover the history of the castle at your own pace. 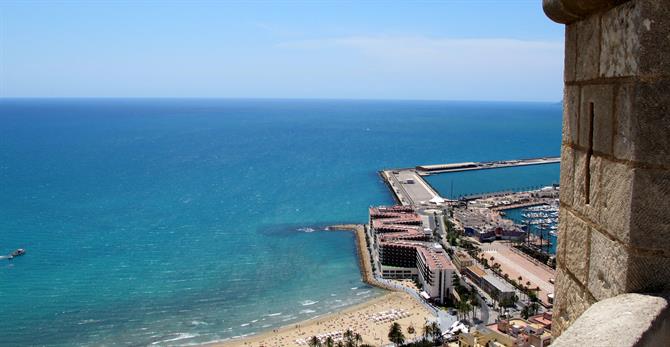 Postiguet beach from Alicante castleAt the foot of the castle is the Ereta park, a beautiful green space in the city centre with a restaurant and exhibition hall. It is a great place to relax and have a picnic or meal in the café after spending time walking around the castle. The park has some beautiful native flowers.You could also treat yourself to a meal in La Ereta restaurant, where you can enjoy fine cuisine with fantastic views of the castle and Mediterranean. Star-crossed loversMany people have remarked that the mountain on which the castle sits looks like a person’s face when seen from Postiguet beach. It has been called La Cara del Moro (The Moor’s face). It is said that many years ago a princess lived in the castle and fell in love with a Moor. Her father disapproved and forbade her to marry her sweetheart. She was so heartbroken that she threw herself over the castle wall, down the mountain and died. When her Moor found out, he did the same for love. It is his face that you can see on the side of the castle. Whether or not the legend is true is debatable but no castle is complete without legendary tales of star-crossed lovers.