Alicante restaurants conjure up delicious cuisine, so what could be finer than accompanying your meal with a local wine? The region has many fine bodegas producing award-winning young wines at amazingly low prices.

Although Alicante is rightly famous for its golden, sandy beaches, it is also a beautiful rural retreat. Head away from the beach resorts and you will be in beautiful countryside surrounded by fruit trees heavy with cherries, oranges, lemons, grapefruits and olives, as well as vineyards to make a delicious selection of wines. As you travel around the countryside, you will see many vineyards, producing a range of reds, whites and the sweet muscatel or mistela wines. 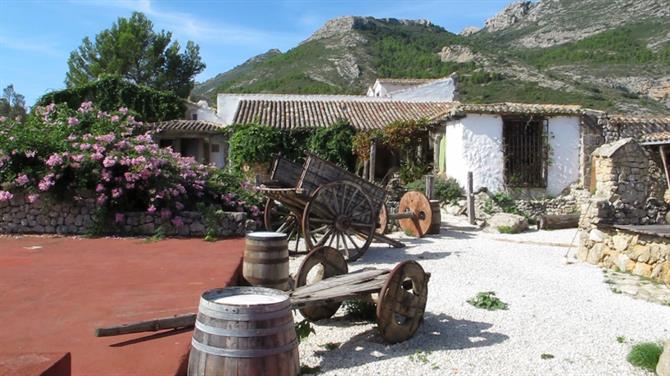 At Maserof bodega, you even have the chance to join in the traditional barefoot treading of the grapes during the autumn harvest. Many others offer guided tours and wine tasting so you can find out more about the varieties and how they are produced.

Alicante has a long history of wine growing which is thought to date back to Roman times. It became very popular in the 16th and 17th century when the wines were exported to northern Europe. Spain’s fine wines are enjoying a revival for their flavour and their price.

The Alicante region’s good soil, mild climate and relative humidity make the area ripe for wine-making. Although there are many varieties of grape, the most established and best-known are Muscat de Alexandria, Monastrell, and Alicante Bouschet. There are also sparkling wines made with muscat, which are great value for money.

Alicante’s main claim to fame is that the Fondillon wine, which was known simply as Alicante wine for many years, is one of the five wines entitled to its own name along with Champagne, Sherry, Port and Cava. Fondillon is a sweet, mellow wine made from overripe Monastrell grapes and aged for at least 10 years in oak barrels. It is very similar to a vintage Porto wine, sweet Madeira wine or Italian Marsala. It is a perfect accompaniment for creamy blue cheeses, desserts or sweets, including the Alicante nougat called turron. The wine was virtually wiped out when the phylloxera plague destroyed the vineyards in the early 20th century. Production revived in the 1950s and is currently only produced in the Vinalopo Valley in towns such as Monovar, Pinoso and Sax.

If you want to sample a typical Spanish town brimming with local character, fine foods, award-winning wines and stunning scenery, head for the Jalon Valley, which is about a 30-minute drive from Benidorm, Javea and Denia. The best times to visit are in February or March when the valleys are blooming in pink and white from the orange, lemon and almond blossom. Take a deep breath as the scent is divine. September and October are also great months for a trip to Jalon at harvest-time.

Tractors – and sometimes horses – pull carts filled to the brim with grapes to be turned into delicious wines. This is superb wine country with award-winning reds, whites and rosés as well as cava and the local mistela, a sweet wine made from the Muscatel grape.

The best bodega to visit is Bodegas Xalo, which local farmers set up as a co-operative in 1962. Nowadays the wines are highly-sought after as they offer great value for money and are brimming with flavour. Many have won coveted national and international awards. You can also try before you buy. Particular favourites are the Bahia de Denia white, Vall de Xalo red, Vall de Xalo muscatel and Vall de Xalo Brut Nature cava. You can also buy olive oil, honey and raisins produced in Jalon.

Fine wines can also be found a little further south at the Bodegas Bernabe Navarro in Villena. The vineyard is in a valley sheltered by the Morron, Solana and Villa mountains, at an altitude of up to 750 metres. The water, air, wind, rain, sun and soil help to create great conditions for growing grape varieties such as monastrell, tempranillo, cabernet sauvignon, merlot, syrah and Grenache. Cultivation is carried out with respect to the environment, soil and planet to help improve the performance and quality of the grapes. Organic pest controls or natural ingredients such as cinnamon are used.

Also in Villena is the award-winning Bodegas Finca Lagunilla, which launched in 2003 with the aim of producing quality wines under the label Casa Corredor. The vineyard combines traditional methods with modern wine-making techniques. Although a young vineyard, its wines have won international acclaim with prizes including the International Wine Guide 2010 for its Syrah 2008.
On The Wine Trail

A lovely route to learn more about wine is in La Mata and Torrevieja salt lakes, which stresses the enormous impact that La Mata vineyards have had on the wine industry. The route passes through the park’s vineyards with information boards telling the history, varieties, culture and cultivation of wine in an area of outstanding natural beauty. Two grape varieties are grown – Muscat and Meseguera, from which the well-known La Mata wine is made.

For those who have more time or are keen to find out more, they can follow all or part of the Alicante wine routes. This goes through towns to visit vineyards in beautiful rural towns and larger cities such as Elche, Monovar, Novelda, Pinoso, Villena, Jalon Valley and Alfaz del Pi. There are several trails so visitors can enjoy the beauty of the towns, try the regional cuisine in family-run restaurants and stay in farmhouses or rural hotels.

Wine corks at Bodega Enrique Mendoza, Alicante
For Vine Is the Kingdom

One of the most popular vineyards for a wine-tasting tour or during their special open weekends is Enrique Mendoza bodega at Alfaz del Pi, near Benidorm. Sr Mendoza’s passion for wine led to him setting up the vineyard to produce fine wines. During a visit, you can learn about the most important aspects of making wine, including the varieties and techniques as well as the importance of using the right barrels and how corks are made. The grapes used include chardonnay and muscatel for the white wines, and Cabernet Sauvignon, merlot, shiraz and pinot noir among others in the reds. You get a chance to sample several wines before deciding which ones to take home.

In Spring, the vineyard holds an open weekend where you can take a look around and sample some varieties. There is also a quick course in wine tasting and a workshop. Traditional food and cheeses are also available for this popular event.