Many people who fly into Alicante for the first time are surprised to see how mountainous it is. Indeed. In fact, Spain is the second highest country in Europe with an average altitude of 650 metres.Switzerland is top. The Alicante region of Spain is where the mountains meet the sea. There are many mountains to climb, drive along or simply enjoy the view from your sunbed on the beach. Spain-Holiday has picked six of its favourite mountains. 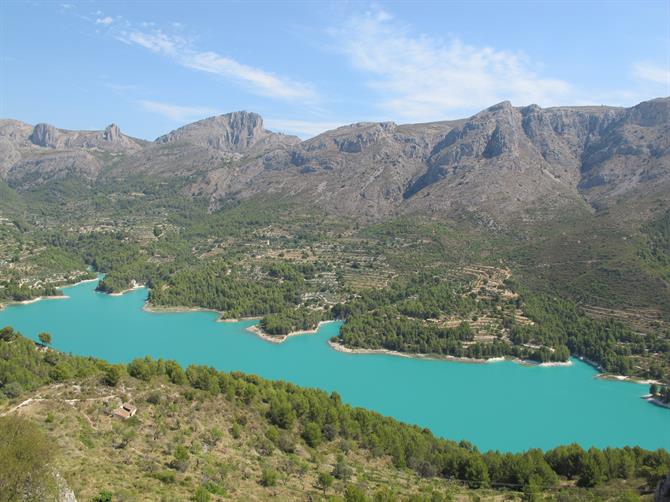 Serrella’s simply the best
La Serrella is definitely the best mountain to visit in the Alicante region. It’s famous for the impressive geological feature called Els Frares or the friars. These rock formations, between 10 and 100 metres high, are caused by erosion.They remind us of the impressive rock carvings at Montserrat near Barcelona.
From the top, you can also enjoy far-reaching views of the neighbouring mountains,Guadalest, and the Mediterranean. On a clear day you can see the island of Ibiza.
It has three peaks, the finest of which is also the highest, Pla de la Casa, which has a snow well beneath it. One of the best places to base yourself while exploring Serrella is the tiny village of Quatretondeta, a traditional Spanish village surrounded by olive groves and mountain ranges.
From here you can also go to Castell de Castells, a natural stone monument with a double arch in the rock, which is a firm favourite for photographers to use to frame their pictures.
How to get here: From the AP7 take exit 65 at Benidorm. Get on the CV70 to Benasau and then take the CV 710 to Quatretondeta.

Legend of Mariola
Further inland heading towards Alcoy is the splendid mountain range of Sierra Mariola. This area gets a lot of water so the landscape is lush – from golden yellow tones in autumn and snow white in winter to yellow and green in spring and summer.
It’s a fertile mountain chain where a wide variety of herbs grow. Traditionally used in medicine, these are now found in regional dishes and are used to make the herbal liquor herbero.
The legend of Mariola says that a nobleman Mario became rich from the Mariola gold mines, which made the emperor Nero very jealous. He decided to capture Mario’s beautiful young daughter Mariola, who was passing near to his land with a black panther for protection. One version says the beautiful girl was flung off the mountainside. Another says she hid in the mountains and was never found.
How to get here: From Alicante follow the A7 signs to Alcoy, which takes you to the east of the Sierra Mariola.

Javea’s elephant
The Montgo natural park between the beach resorts of Denia and Javea is an impressive headland, home to wild birds including owls and eagles, rabbits, badgers, toads, lizards and snakes. It’s also home to fragrant herbs, flowers and trees.
You can explore little caves and hermitages where prehistoric nomads and, in later years, religious men such as Pare Pere came to meditate.
In the 10th century the Moorish chief Abd ur Rahman III collected more than 100 medicinal herbs from the Montgo.
There are easy climbs as well as more challenging hikes, plus plenty of tales to tell about this iconic mountain. From the Javea side, the slope of the Montgo looks like an elephant’s head and trunk.
How to get here: Take the Denia turn-off on the N332 or AP7 and follow the signs for Denia along the CV725 to Carrer de Diana. Continue on to the Cami de Sant Joan and take the 3rd exit at the roundabout for the Cami Santa Llucia and Cami Assagador del Pinar where you will reach the bottom of the Montgo.

Mountain wines and cherries
Sierra Bernia is a beautiful mountain stretching 11kms from the coast between Callosa d’EnSarria and La Punta de Toix.In the 16th century Felipe II ordered a fort to be built on the mountain to protect it from marauding Moors and pirates. Today, it is prime wine country with vineyards dotted around the mountain.
It’s a popular challenge for walkers and cyclists who are rewarded with fantastic views when they reach the higher points. The cherries grown in the area are also said to be the best in the region. The locals argue that the higher the cherries are grown, the better they taste. The same argument could also be applied to the wines.
How to get here: Take the Jalon (Xalo in Valenciano) turning off the AP7 or N332. In the centre of Jalon, there is a roundabout with a signpost to Bernia, follow the Carretera Xalo-Bernia, which can be winding, up the Sierra Bernia.