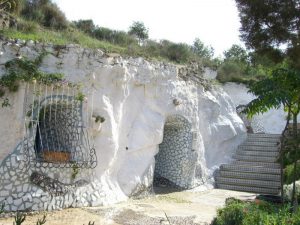 The Cuevas del Rodeo are a collection of traditional cave houses built into the hillside of Rojales between the 18th and the 20th century, reflecting a style of building which can also be seen in the Vega Baja area of the province of Alicante in San Miguel de Salinas.

Nowadays the cave dwelling complex has become a series of arts and handicrafts workshops and studios, The Cuevas del Rodeo in Rojales, cave houses converted into art studiosand the caves numbered 4 and 6 have been converted into an exhibition hall and a tourist information office respectively.

The residences dug into the rock occupy spaces of up to 5 metres high which were created in the hillside, with the rock and earth excavated being used to create flat platforms outside the homes. These platforms were occupied by vegetable gardens in order to make the residents more self-sufficient.

The Town Hall of Rojales sees the caves as a chance to create a grand underground museum, and there are a wide range of cultural and artistic events held at the venue as well as the daily artistic tours.

The Cuevas del Rodeo are open to visitors on weekdays from 9.00 to 15.00, while those wishing to arrange visits in the afternoon or at weekends can do so by contacting the tourist office of Rojales on 966 714160 or by email at cuevasdelrodeo@rojales.es. Ideally, reservations should be made two weeks in advance, and unfortunately there is a maximum group size of 10 people.