The Arabian influence can be seen – and tasted – in many corners of Spain but nowhere more so have the Moors made their mark than in the rural town of Crevillente.

This small town produces some of the finest carpets in the world. Visitors to the top five-star hotels or plush restaurants will undoubtedly have walked on carpets made in Crevillente. Although many carry a very strong Arabian or Persian influence, other designs are bold, abstract statements.
Moorish influence

For hundreds of years until the Reconquest of Spain in the 15th century, the Moors ruled much of the Iberian peninsula.

They introduced orange and olive trees, rice fields, saffron, spices, vineyards and new methods of agriculture to the region.

Many of their farming methods and traditional cuisine are still very much in evidence today from the use of saffron and rice in paellas to the types of wines served with it.

In one small town, the Moors left another legacy – making carpets. 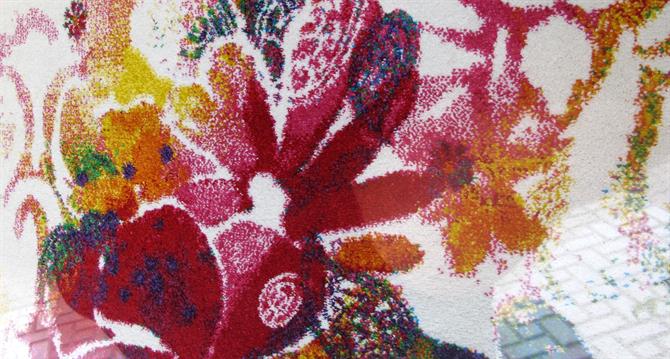 Close-up of a carpet in Crevillente, Alicante

In Crevillente, at the foot of beautiful mountain ranges, the craftsmen turned their attention to weaving quality rugs and carpets.

Although it is believed to date back to Roman times, the first documented evidence of carpet weaving dates to 1411 when an agreement was signed giving the Moors permission to mow the reed beds of the nearby Vinalopo and Segura rivers. The reeds were dried and woven to make mats.

From these humble beginnings, the craft grew with Crevillente becoming a byword for quality rugs and carpets.

The industry boomed at the beginning of the 20th century when the first power looms arrived.
Many of these family firms are still thriving in Crevillente, known as the city of carpets.

It is possible to visit their factories just off the N340 main road on the outskirts of town, close to the train station, to see the craftsmen at work and to order your very own carpet made in Crevillente.

Make sure you visit a recognised manufacturer and your purchase bears the Alfombras de Crevillente logo with a white flower on a green background. Cheap imitations can be found but they will not be of the same high quality or made with natural fibres.

Today, there are about 40 firms carpeting the world, including major businesses such as hotels, trains, and company headquarters.

The rugs are still made with natural fibres such as wool, but the firms use the latest looms and technology.

Crevillente manufacturers include Alarwool, which supplies prestigious hotel chains and casinos; Alfombras Iberia, which offers guided tours from its headquarters on the Ctra Murcia-Alicante road; Lledo Carpets, founded by Antonio Lledo Martinez in 1942; and Unitex, which you can also phone ahead and visit.

Things to do in Crevillente

At the foot of the Sierra de Crevillente and just a few kilometres south of Alicante and Elche, Crevillente is a traditional rural town.

As well as its major carpet industry, Crevillente also has a thriving farming community producing pomegranates, almonds and olives.

Despite its humble appearance, the little town has an expansive culture especially in the world of music, art and fiestas.

The town houses a museum to the Valencian sculptor Mariano Benlliure. His public monuments and religious sculptures can be seen throughout Spain. One of his most famous works is of King Alfonso XII on horseback which stands in the Retiro park in the centre of Madrid.

The town also has a museum dedicated to Madrid artist and adopted son of Crevillente, Julio Quesada, whose forefathers were from the Alicante town.

Julio Quesada Museum is in Calle Corazon de Jesus 17-19, Crevillente
Open during weekdays from 9am to 2pm and 5pm to 7pm. To visit outside these hours call 666 674 508

Crevillente is also the birthplace of the famous doctor Mas Magro, who was a leading light in the field of haematology in Spain. His laboratory is in the Casa del Parque, which also houses the town’s archaeological museum and art collection.

The Casa del Parque is in the large Parc Nou where a large blue obelisk dominates the skyline. The monument’s granite base marks Crevillente’s most important achievements.

The town hosts two noteworthy fiestas – during Holy Week and a re-enactment of the Moors and Christians battles held at the beginning of October. If you can’t get to Crevillente for Easter, in the Semana Santa museum you can see some of its magnificent sculptures which take centre stage during the Holy Week processions. Semana Santa Museum is in Calle Corazon de Jesus, CrevillenteOpen Tuesdays to Fridays from 6pm to 9pm, Saturdays from 10.30am to 1.30pm and 6pm to 9pm, Sundays and fiesta days from 10.30am to 1.30pm. Entry is free. 674 508.Click here for further informationCrevillente Cuisine Like all Alicante towns, rice features heavily in many dishes. The paella from this town is made with rabbit and snails while on the coast you are more likely to eat it with fish and shellfish. In winter, you can try the ‘gachamiga’ of cod and garlic, ‘arros caldos’ made with rice, vegetables and pulses, or the ‘cocido con pelotas’ which is meatballs served with chickpeas, potatoes and vegetables. Crevillente also serves a variety of tasty cocas, which are like mini pizzas. Traditional cocas include cod, anchovies, sardines, tuna or vegetables. More than 41,000 cocas are made each year in the town, of which about 12,000 are eaten at Easter.

At the end of the 18th century, Elche’s population rocketed and houses were scarce. People took to the nearby hills where they created cave houses. By 1970, there were about 900. Cave houses provided cheap accommodation with the advantage of staying cool in the hot summer months and warm in winter. The caves maintain an average temperature of about 24º throughout the year.

Flamingos in El Hondo, Crevillente El Hondo nature park The El Hondo nature park is one of the most important wetlands in Spain. Between Crevillente and Elche, it has two lagoons, several ponds and salt marshes with crops and palm trees. This natural oasis is a protected area for birds with about 170 species including the rare marbled teal and white-headed duck as well as herons, other duck species and flamingos. There are several walks in the park where you can find out more about the flora and fauna here. A good time to visit is in the evening where you can see amazing sunsets while observing the birds’ activities. Crevillente mountain The gentle slopes with tracks and paths mean the Crevillente mountain can be tackled by most hikers – or on horseback. Places to visit on the mountain include the shady spot of El Pi de L’Alivi, the 70 or so dry-stone huts, the Cati slopes to enjoy wonderful views, the attractive Castell Vell and ravine, the Pouet of Mel with a well between the limestone rocks, and the iconic Pixatco of San Cayetona standing 815 metres high.