Alicante and the Costa Blanca is geared up for family holidays. Its fabulous theme parks with rides that seem to defy gravity, theatrical shows and wild animal parks are among the best in Spain. 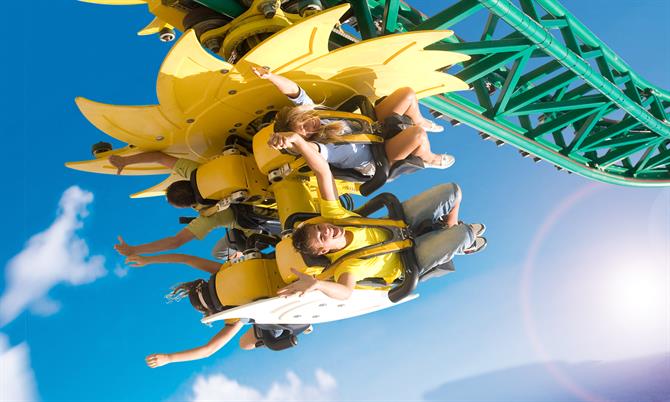 Terra Mitica
Terra Mitica in Benidorm is the most popular theme park in the Alicante region. If you love the adrenalin rush of white-knuckle rides, this is definitely for you. You can zoom through the air at 90km/h, upside down, while 35 metres off the ground, or you can enjoy the views of Benidorm beaches and Terra Mitica while swinging in the breeze. There are rides for all the family as well as many spectacular shows to make a great day out for all the family. The park is divided into ancient Greece, Egypt, Rome, Iberia and the Mediterranean islands, so you can expect to come across Roman gladiators, an Egyptian Phoenix and a Greek labyrinth during your trip. Open April to October. Every day of the week from mid-June to the first week of September.
Terra Natura
Terra Natura is an entertaining wild animal park where the animals live in a specially-designed version of their natural habitat. Huge elephants, camels, tigers, poisonous snakes, and very chatty monkeys live here. In all, more than 200 species, including animals in danger of extinction, form part of the collection. The park is divided into different continents such as Africa and Asia with natural plants and shrubs to create a home from home for the animals. You can watch the elephants being fed, see majestic birds of prey in flight, and meet a variety of animals up-close during your visit. Open all year. 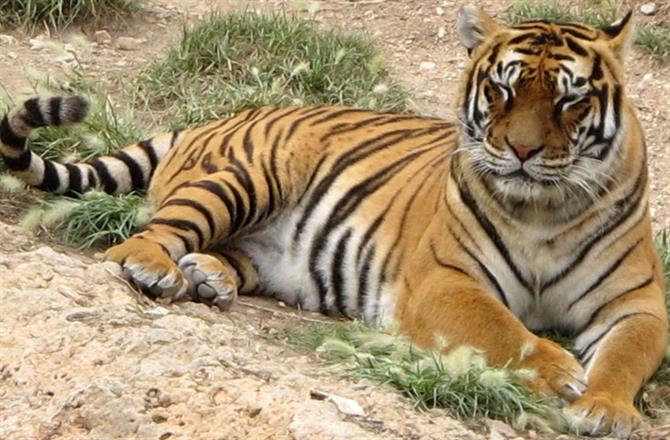 Aqua Natura
Want to know what it’s like to experience zero gravity? Next door to Terra Natura is Aqua Natura water park, where you can cool off after your visit to the zoo. Aqua Natura says it is the only water park to have The Crest – an enclosed water slide – where you can experience the feeling of weightlessness. The Benidorm theme park has slides and water attractions to suit all ages. You can also watch the sea lion show, where the little creatures are so full of character and fun, or even get the chance to swim with them and have your photo taken. You can buy a joint ticket for Terra Natura and Aqua Natura to save money. Open from May to mid-September.
Rio Safari
Further south, between Elche and Santa Pola, is the fascinating Rio Safari park. Sheltered by 4,000 palm trees, Rio Safari has animals from around the world including lions, elephants, zebras, crocodiles and tigers. Make sure you have time to see the chimpanzees on their special Primates Isle with swings and hammocks for them to play on and rest. During the day is a special sea lion exhibition when they show off their skills, in and out of the water. You can enjoy a camel or pony ride, swim with the sea lions, or talk to the lemurs. In the summer there is a free swimming pool on site and also a karting area. Open all year. 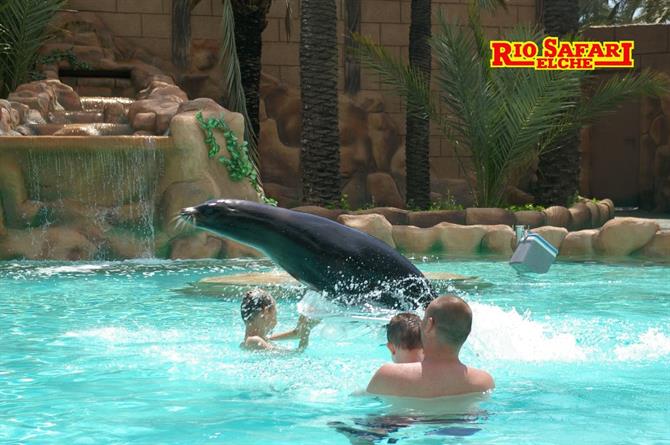 Safari Aitana
Chance to get up close and personal with the animals, enjoy a private tour of Safari Aitana or even become a keeper for the day. Safari Aitana is an oasis for wild animals from five continents. During your wildlife adventure, you can see giraffes, buffaloes, donkeys, camels, monkeys, elephants, tigers, Vietnamese pigs, jaguars, wolves, snakes, emus and so much more. The park is 1,000 metres above sea level in the Aitana mountain on the Villajoyosa to Alcoy road. It’s a lovely drive up through the mountains too. You will either need your own car to drive through the safari park or go on an organised tour. Open every day.
Aquopolis
A visit to a water park is definitely a great idea for the family during the summer holidays, Aquopolis Torrevieja has challenging slides and chutes as well as gentler rides for the little ones. There’s also an exclusive VIP zone where you can enjoy the peace and quiet to read a book or listen to music from your sunbed. If you’re feeling active you can join in Aquagym or Steps while the younger children can head to the MiniClub for organised games in and out of the pool. Open in the summer months.

Mundomar
Swimming with dolphins is on many people’s bucket lists. There’s something magical about dolphins, the way they chatter or seem to smile. At Mundomar in Benidorm, you have the chance to get to know these incredible animals, to swim with them, to stroke them and have your photo taken with them. At this amazing marine animal park, you can also watch the dolphins perform in a fantastic show, watch an entertaining parrot show and sea lion show, or see spectacular birds soaring in flight. You could also be a keeper or trainer for the day. Cheeky meerkats, lemurs, giant tortoises, flamingos, macaws, storks, penguins, prairie dogs and owls are among the other creatures to learn about during your visit. Open every day.
Aquapark Rojales
Sliding down a magic carpet, taking up the kamikaze challenge, discovering the secrets of the Amazon, heading down the rapids of the Yucatan River or simply splashing around in the swimming pool are some of the attractions. There’s also a large lawn for relaxing as well as a restaurant offering typical Alicante cuisine including paellas. Aquapark was the second water park to be built in the Valencia province and is found in a natural valley in Ciudad Quesada, near Torrevieja. Open in the summer months.
Pola Park
So many things to do inside one theme park, Pola Park is the ultimate attraction for families with different interests. Enjoy a visit to the Russian mountain – with fabulous views of the Santa Pola salt lakes – feel the thrills of racing on the karting track, avoid getting bumped on the bumper cars, become a superhero on the bouncy castles, head for the merry-go-rounds, beat dad at golf and enjoy all the thrills of fairground rides at the Pola Park in Santa Pola. Open from March to mid-October (weekends only) although open every day In July and August.
Aqualandia

No fear of heights? How about testing your nerve in the highest capsule slide in the world on the VertiGo toboggan? Aqualandia in Benidorm has some fabulous chutes, slides and waterfalls so you can keep your cool . Some are high action to test your nerves, while others, like the Niagara, are much more relaxing. Aqualandia was the first water park to be built in Spain and is still one of the largest in the world. All the family will be able to enjoy the water rides, splash pools and other great attractions. You can buy tickets for Aqualandia and MundoMar or Terra Mitica, or for all three to save money. Open from May.