It’s just 12kms from Alicante airport, which is used by many budget airlines, so you can enjoy a bargain weekend in the city.
Easy city to walk around

The city centre is compact so you can easily stroll from the beach to the main attractions within a few minutes. Spain-Holiday has chosen a route where you can enjoy the sights as you stroll around this charming Mediterranean port.

The museum is packed with information and hands-on experience of the longest and most challenging round-the-world yacht race. The race starts in Alicante in October for the third time.
Beach life

As you walk towards the centre of Alicante, you will see the long sandy Postiguet beach to your right. Cafes and restaurants line the beach so it is a favourite spot for a coffee or lunch as well as topping up your tan or having a swim. 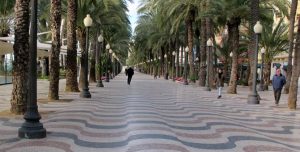 We’re going to turn left to walk along the iconic Paseo Explanada de Espana, which is one of the most beautiful seaside promenades in Spain.

Thousands of small red, black and cream marble tiles have been used to create the boulevard so that it resembles the waves in the sea.
Elegant Explanada de Espana

Many cafes and restaurants can be found along the Explanada, so it is a great time to visit at any time of day. Evening is popular with many people as you can have a stroll along the elegant street lined with palm trees while deciding which restaurant to dine in. 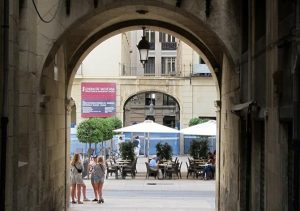 Off the promenade on the right is the Calle San Telmo leading to the delightful Calle Mayor. Here you will find the Museum of Contemporary Art (MACA) in the Plaza Santa Maria.

In this square you can also visit Alicante’s oldest active church, the Basilica of Santa Maria. It’s a beautiful Gothic church built in the 14th to 16th centuries on the site of a former mosque.

Head down Calle Niagara and you will come to another great Alicante landmark, the Museum of Fine Arts (MUBAG), housed in a former palace dating from the 18th century in Calle Gravina.
Take a trip to the town hall

Along Calle Mayor is also the elegant 18th century Alicante town hall in the Plaza de l‘Ajuntament. It is a striking Baroque building with interesting columns on the two towers.

Look out for the Salon Azul styled from the time of Queen Isabel of Spain and the Cota Cero on the main staircase which is the reference point from which Spain’s cities are measured in metres above sea level.

Heading back on to the Explanada we keep walking alongside the marina with its gorgeous sleek yachts. 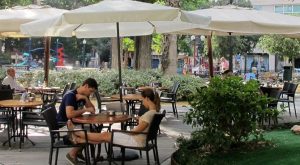 Turn right up Avenida Dr Gadea to the Plaza Calvo Sotelo, a pretty square full of trees where you can relax or enjoy a coffee for a while.
Quality streetCalle San Francisco, Alicante, with childlike giant mushrooms

Around the square are many interesting shops including a fabulous sweet shop, Tienda Fini, with the brightest-coloured sweets you have ever seen including jelly babies, jelly beans, chocolates and mini tennis balls.

On the corner of this shop is the fascinating Calle San Francisco. A few years ago, this was pretty run down but it’s now a surreal pedestrianised street with giant mushrooms, ants and snails dotted around.

The road is a great place for dining out as various restaurants and bars have set up here including traditional cafes, a cupcake café, tapas bars, Italian restaurants and a sushi bar. 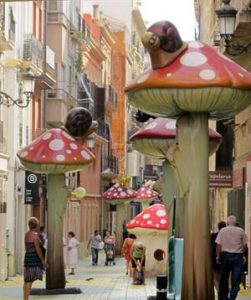 This leads you to what is arguably Alicante’s finest and best-known square, the Plaza Portal de Elche, built in the 19th century as a water supply and meeting point.
Old-fashioned air 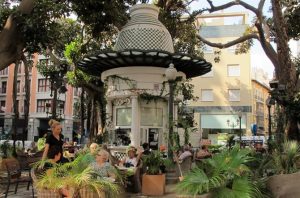 There’s a lovely old-fashioned kiosk in the square where you can read the newspapers and order a coffee. There are some beautiful old, protected trees with gnarled trunks twisted into interesting shapes.

The square leads you to the Rambla Mendez Nunez, a famous street for restaurants and shopping.
Fine example of Spanish Baroque 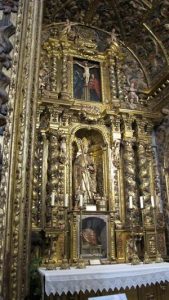 Heading up the Rambla, away from the sea, you can turn left into Calle Teatro to visit Alicante’s splendid principal theatre, in Plaza Ruperto Chapi, which stages world-famous plays and operas or turn right into Calle Miguel Soler for San Nicolas cathedral.

San Nicolas cathedral, in Plaza de Abad Penalva, was built over an ancient mosque in the 17th century. Worth seeing are the Holy Communion chapel which is considered to be one of the finest examples of Spanish Baroque and the distinctive blue dome, which is 45 metres high.

If you go back along the Rambla up to the busy Avenida Jaime II, you can visit the central market with stalls brimming with fresh fruit, vegetables, fish of all shapes and sizes, meat and home-made sausages.

Outside the main entrance are two traditional kiosks selling local turron, similar to nougat, while there is a colourful flower stall on the other side of the market with an amazing choice of flowers and trees.

This fascinating building looks far too grand to house a traditional market with its rectangular floor plan styled like a basilica and Modernist features.

From here you can see the imposing Alicante castle which looms over the town from a lofty height of 166 metres. It is one of Spain’s most impressive medieval fortresses with grim dungeons, lofty towers and ruins to explore. 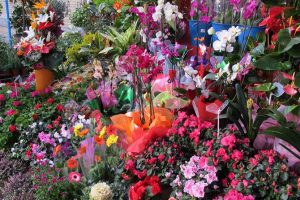 There are also tales of ill-fated lovers, battles and hundreds of years of local history to find out about.

From the Santa Barbara Castle, there are fabulous views across the bay, marina and Alicante old town.

At the foot of the castle is La Ereta Park where you can also enjoy fabulous views of the cathedral and the port.

Cross the road and you are back to the Postiguet beach for a bite to eat or a well-earned rest. 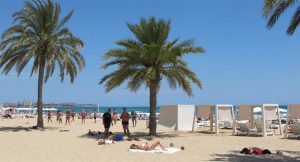 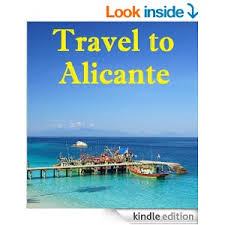 Bonfires of San Juan (Alicante).
Thousands of people throng the streets to pay a tribute to fire and experience a celebration ful of music and fireworks and bonfires to celebrate the arrival of summer.
The people of Alicante would traditionally flock to the countryside on 23 June for a festive dinner: they feasted on typical products, and at midnight they would light bonfires and dance around them, set off fireworks and go swimming in the sea. This custom endured over the years, and in 1928 the fiestas of the Bonfires of San Juan were formally constituted. For several days, Alicante celebrates this great homage to fire, where the stars of the show are genuine works of ephemeral art: the bonfires and the enormous cardboard and wooden figures which go up in flames on the night of San Juan.
The queen of the fiesta, known as the «Bellea del Foc» («Beauty of Fire»), is chosen in May from among the candidates presented by a committee in each neighbourhood. The festivities officially begin on 20 June with the «plantà», or building of enormous bonfires with their tongue-in-cheek cardboard figures which fill the streets of Alicante with wit and good humour. That day the «barracas» or large tents are also put up to serve as a public dance floor, and where fiesta-goers can sample the typical figs and «cocas» (a kind of pastry with tuna, onions and pine nuts). Some of the highlights of the festivities include the Entry of the Bands and Committees, with their respective «beauties» and their ladies-in-waiting wearing traditional dress; the floral offering to the patron saint of the city, the Virgin of El Remedio on 21 and 22 June; and the international folklore parade, a spectacular procession featuring dance troupes from all over the world. In addition, every day at two in the afternoon from 19 to 24 June, there are firework displays in Plaza de los Luceros square: these are the ear-splitting «mascletàs», for which ear-plugs are highly recommended due to the racket of the exploding firecrackers and rockets. And finally at midnight on 24 June comes the «cremà» (burning), the high point of the fiestas. After a spectacular white palm tree of fireworks, the bonfires all over the city are set alight and blaze away amid much merriment and dancing and singing, while fire-fighters shower the merrymakers with water in what is known as the «banyá».But the fiesta is not over yet. From 25 to 29 June there is a fireworks competition on the El Postiguet beach, and the historic centre of the town comes alive with a medieval market and a range of shows.

From the middle of the 18th century, the Fallas were just one part of the events held to celebrate St Joseph’s Day (March 19). Throughout the morning of March 18, rag dolls called peleles were strung across city streets from window to window, or small platforms were arranged up against walls showing one or two figures (ninots) that referred to an event or to certain individuals who were particularly deserving of public derision. Throughout the day, children and young people collected items to be burnt on bonfires known as fallas

Later on the mayor of Valencia forbid the positioning of fallas in narrow streets near to buildings etc and this led the inhabitants to construct their fallas only in wide streets, at crossroads and in squares.

As they were now not placed against a wall, the design transformed to allow it to be achievable to look at them from all sides. This produced much greater freedom of construction and invited the inclusion of messages in verse all close to them.

Each falla represents a social action or attitude deserving of criticism or ridicule and this is reflected in the verses displayed. From the middle of the 19th century, these verses began to be printed and bound, giving rise to the booklet known as the llibret

Fallas are celebrated in various other towns in Valencia and Alicante provinces. Even though the times of firecracker presentations and flower offerings can be different from those in Valencia city, all towns will set up the monuments three days before the main night of the burning, March 19. The burning generally begins with the children’s monuments around 21.00 hrs and the main monuments are burned in reverse order to their prize position. The top prize winner is burned around 01.00 hrs. Main Fallas towns include Gandia, Oliva, Dénia and Benidorm.

Last Saturdy evening saw the completion of the four-day Fallas festival, the largest and most famous in the Comunidad Valenciana, when countless numbers of papier-mâché monuments went up in smoke and flames.

Even Though the principal activity during the Fallas usually takes place in the city of Valencia, a

number of other towns and villages in its province – and in the north of the province of Alicante – also come to a dead halt from March 16 to 19 as their residents party hard night and day.

Some of the main features of the fiestas include the prize giving – where the very best monuments are selected – and the ofrena, or offering of flowers to the Virgin Mary.

On the last night, the monuments – which are normally caricatures of current affairs or famous individuals – are set fire to, beginning with the one which comes last and finishing with the winner.

Come Sunday morning, nevertheless, all traces of these enormous bonfires will have been cleared away, whilst falleras and band-members sleep off the effects of four days of eating, drinking, dancing, parading and otherwise celebrating.