Golden sand, hidden coves, turquoise waters and blissful bays attract millions of holidaymakers to the Alicante province each year. With 244 kilometres of coastline, there is plenty of room for all with beaches attracting sun worshippers, divers, surfers, sailors and artists who love the vibrant colours.

There are scores of sandy beaches and coves to suit all tastes. Spain-Holiday has picked its top 10 from long stretches of golden sand to little bays.
La Granadella, Javea

Top beach has to be La Granadella in the north Costa Blanca resort of Javea. It has twice won the prestigious accolade of being voted Spain’s best beach. It’s in a picturesque horse-shoe bay with clear turquoise waters surrounded by jagged cliffs and pine trees. Although the beach is shingle, it is a very popular spot with sunbathers, scuba divers and snorkellers.

The clear waters make this an ideal spot for snorkellers breaking through the water’s surface to see the seagrass beds and colourful fish. La Granadella is a tiny beach at just 220 metres wide and is very popular. You will need to get there early to claim your spot.
Benidorm

The bustling holiday resort of Benidorm also has two of the best beaches in Spain – Levante beach and Poniente. Both beaches are sheltered by the mountains behind Benidorm, which protects the bay from the cold winds, creating a warm microclimate.

Benidorm’s fine, sandy beaches spread for about four kilometres with gentle slopes into the Mediterranean. For early risers, Levante is known as the sunrise beach and is the ideal spot for enjoying a spot of early morning swimming or sunbathing.

The Blue Flag beaches are safe and very family-friendly. It’s a great spot for sailing, jetskiing or paragliding. The long coastal strip has an attractive promenade lined with bars and restaurants offering cuisine from around the world and great offers on daily menus and drinks.
San Juan de Alicante

This fabulous central beach with its fine, golden sand has turned San Juan into a popular spot for Alicante city dwellers and chic urbanites. San Juan stretches for 2,900 metres from the fishing village of El Campello to the rocky headland of Cabo de las Huertas. It’s also just 25 kilometres from Alicante international airport so attracts Spanish families looking for a weekend break.

Legend has it that in bygone days when the Moors ruled Spain, a beautiful Moorish queen would bathe in the natural pools among the rocks. Nowadays, it still attracts bathers but is also a nautical playground for kayaks, yachts, surfing and scuba diving.
El Portet, Moraira 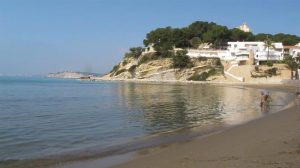 Another little gem on the Costa Blanca, El Portet is in a rocky cove sheltered by rocks with sparkling clear blue waters inviting people to swim, snorkel or surf. This is a brilliant setting for relaxing and soaking up the views of the imposing Ifach de Calpe rock jutting out to sea.

The vibrant blue, crystal clear waters and magnificent setting have led some people to compare El Portet to a Caribbean hideaway. The beach is just 350 metres long and gets very busy in summer. It’s particularly popular with families as it’s such a safe place for paddling.
Santa Pola 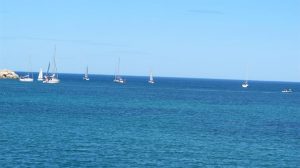 Santa Pola sits in a bay with a variety of coves and beaches which are traditional fishing grounds. Indeed, it’s famous for its fish which takes pride of place in many local dishes such as caldero, which is a tasty rice and fish stew.

Close to the bustling port are Santa Pola’s two main beaches – Lisa and Tamarit – which enjoy fine sands and clear blue waters. The location and moderate swell of the sea have meant these beaches are targetted by windsurfers and kitesurfers, particularly on Lisa beach, which provide entertainment for the sunbathers. The shallow waters also mean this is a safe area for families with children.
Guardamar del Segura 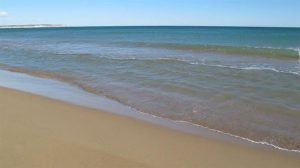 One of the finest beaches south of Alicante is found at Guardamar. It’s a fabulous 10-kilometre stretch of fine sand with a backdrop of a fragrant pine forest. The trees were planted in the sand dunes about 100 years ago to stop them being blown away by the wind.

The forest provides a colourful windbreak to protect the town as well as being a natural haven for walkers. The long, sandy beach has a children’s play area and is another popular haunt for surfers thanks to the good waves. The Guardamar coast boasts a blend of secluded coves for private bathing or snorkelling as well as urban beaches.
Arenal, Calpe 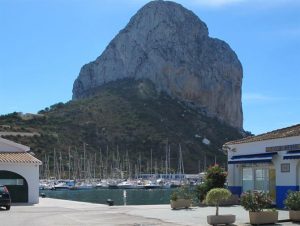 Calpe is one of the most iconic resorts in the Alicante region, thanks to the impressive Ifach rock which is 332 metres high and juts out to sea. The coastal town is also home to 14 beaches and coves, which attract sunbathers and water sports enthusiasts.

The busiest beach is the Arenal-Bol in the city centre with a golden mile of fine sand and clear waters. The urban beach has great views of the Ifach rock and is close to the marina, where many swish yachts are moored. A few minutes’ walk from the beach is a salt lake where many flamingoes and herons can be seen.
Albir beach

Nestling between the picture-postcard hilltop town of Altea and the brash resort of Benidorm is a lovely little coastal town with a golden, sandy beach. Albir is a hidden gem sandwiched between better-known resorts. Its Blue Flag beach is perfect for family holidays as the water is shallow while the beach is close to the shops and restaurants in the town centre.

This is a great resort for film lovers as the seaside promenade has its own Paseo de las Estrellas or Stars’ Promenade to rival the Hollywood Walk of Fame. Albir’s version is to commemorate the winners of the prestigious annual Alfaz del Pi Film Festival, which is held three kilometres from Albir.
Las Marinas, Denia 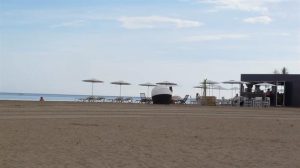 Denia enjoys 15 kilometres of beaches from long, sandy stretches to rocky coves. One of the most popular is Las Marinas, which is an attractive part of town for tourists during the long summer months. This is a safe beach with a bar in summer, beach beds, long stretches of golden sand and shallow water, so it’s great for children.

When the wind gets up, you can watch the acrobatic antics of the kitesurfers and windsurfers who head for this part of Denia. Across the road are plenty of bars and restaurants so you can enjoy the beach all day.
El Cura, Torrevieja 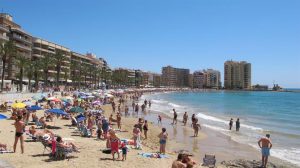 A golden sandy beach flanked by hotel blocks and restaurants serving international and local cuisine have turned El Cura into one of Torrevieja’s top spots for sunbathing and swimming. It’s a picturesque corner of the bustling Torrevieja resort with photogenic images of palm trees, a pretty promenade and boats sailing into the harbour.

Musicians, street hawkers, buskers and artists making carvings out of sand bring added character to this busy urban beach. In July the Habaneras Night on the Beach is held at El Cura with thousands of people heading to the beach to have dinner and listen to free music.